Voice selection in academic writing, in the first place, depends on the context and content of your sentences and the section of your paper you are writing.

Traditionally, especially in the twentieth century, the passive voice was used in scientific writing, but in recent times, there has been a shift from this trend, with journals and editors increasingly showing a preference for the active voice.

Voice of a verb refers to the connection between the action that the verb expresses and the participants identified by its arguments.

In this article, we will discuss the application of the two voices in research and academic writing.

The basic distinction between active and passive voices of a verb is that the active voice emphasizes the person (or actor) who does an action.

The order of words in a sentence with active voice is subject, verb, and object.

* Subject in the sentence precedes the verb and the focus is on who classifies glass, not how glass is classified.

In academic writing, depending on the style and what you, as a writer, intend to convey and emphasize, consider whether you should use the passive or active voice. If the emphasis is on the doer or actor of an action, go for active voice.

According to the APA 6th Edition, Section 3.18, authors should use the active voice for clarity (APA, 2010, p. 77) and because the actor (or grammatical subject) precedes the verb, the emphasis is put on the subject.

Writing in the active voice means the subject of the sentence clearly performs the action that the verb expresses. Determining who is the actor or agent of an action is difficult by the passive voice.

The passive voice emphasizes the recipient of the action or sometimes the action itself.

An experimental solar power plant will be built (verb in the passive voice) in the Australian desert.

* Here, the focus is not on who is building the solar power plant

Traditionally, the passive voice was preferred to be used in academic writing, but in recent times, the interest in passive voice has been shifted to active voice. Now, journals and editors prefer active voice for the sake of clarity and comprehensibility, according to APA’s recommendation, saying passive voice makes the text more wordy and difficult to understand, especially when used in long sentences. Most of the critics who encourage using active voice in research and academic writing believe that the overuse of passive voice can create awkward sentences that are flat and uninteresting, as well.

So which should you use? The answer is a combination of both, keeping in mind the clarity as a guiding principle. Depending on the information the target reader is looking for, you can choose between the active or passive voice.

Although many academic writers often favour active voice because it is direct and concise, both voices are useful and necessary.

A reader may perceive that a manuscript with the overuse of passive voice is weak, lack important information, and its author is unsure of his/her ideas.

In general, scientific style manuals recommend using the active voice as much as possible as it is direct, clear, and concise and improves readability.

Using the passive voice often makes it unclear who was responsible for the action.

Most journals ask authors to submit their manuscripts using active voice if they feel this will help readers understand the subject matter better and more easily, rather than passive voice, in their writings.

However, you may find other examples where the passive voice is preferred to be selected over the active.

Using the passive voice can at times help avoid repetition and add variety.

The passive voice emphasizes the person or thing acted on.

The passive voice puts focus on what was done, not on who did it.

Where to Use Active Voice?

Now let us study which sections of a research or academic paper require the use of the active voice and where the passive would be preferable.

In these two sections, the author discusses previous research and then introduces his/her own.

This section often seeks to describe the most important contributions in the field, which makes actors/agents/authors important.

Where to Use Passive Voice?

The author in this section focuses more on the steps taken, and “what was done”, than the doer or actor, and “who did it.”

Since the presentation of results calls for objectivity, and they are true disregarding the doer of the experiment, passive voice is used here to lend universality to the results.

To put it in a nutshell, scientific/academic writing makes use of both the active and passive voices, based on the focus and emphasis of the author and the study itself. To differentiate between these two, you’d better consider clarity as your guiding principle and make sure what information the target reader is looking for. 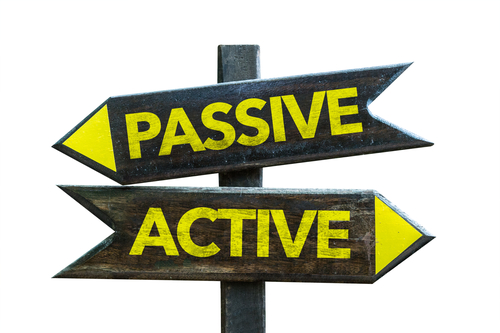